A comic about the "evil maid" attack

Here is another comic about security! I swear, everything a security expert needs to know can be learned by reading old comics. If you ask me, these security guys are overpaid. Wait, I am one of those security guys now! Never mind.

This is yet another Franco-Belgian comic. This one was published in 1971. How does a pre-AOL comic relate to computing security? Well, read on!

Context: The heroes are looking for a friend, who  disappeared after responding to a "help-wanted" classified ad in the local newspaper. The ad was anonymous, so only the newspaper knows who the ad poster was.

For Millenials: classified ads were pages covered with various ads and announcements you could publish for a fee. An anonymous ad was like Craiglist on paper, with not even a phone number, only a reference that you responded to by writing a letter to the newspaper. Say what? What's a newspaper, you ask? Oh, man... Forget it. Just enjoy the comic. 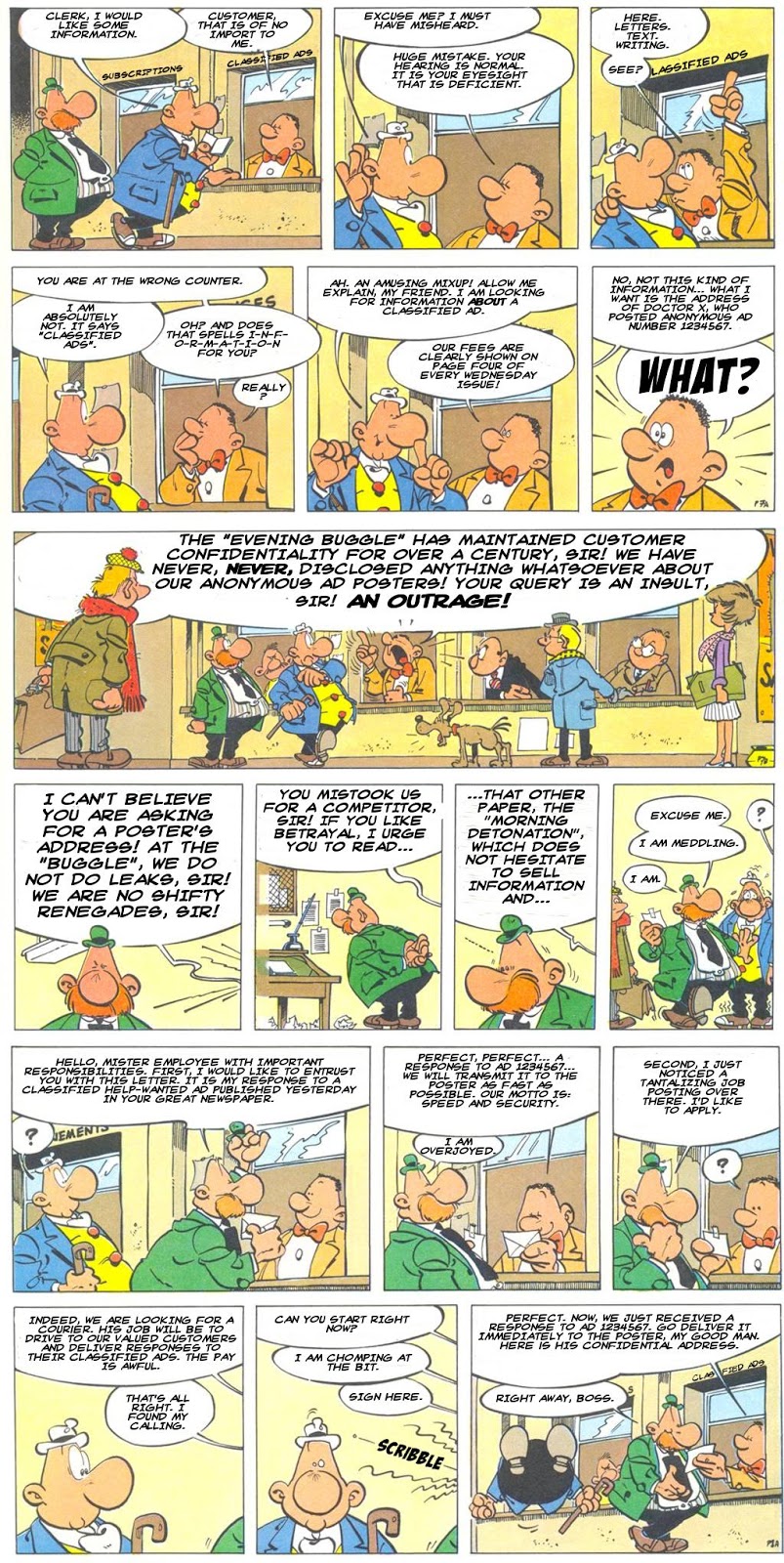 The comic is from the album "The Awkward Age", part of the "Walter Mellon" series (Achille Talon, "L'âge ingrat" in French).

Only one album of the series was translated into English, sadly: Magnesia's Treasure. The latter is a hilarious romp in a South American country where a local treasure is disputed between head-shrinking (but business-minded) natives, a no-nonsense military, greedy guerilla men, a naive countess, and scappy explorers. In a satirical tone, the series visits very serious topics such as war, terrorism, dictatorship, without every becoming preachy or strident.

In information security, the "evil maid attack" happens when a dishonest employee steal his company's information, especially files. In this comic, the file in question is the confidential list of ad posters. In a modern, computerized company, the files would be located on a machine that is left unlocked, or would be intercepted and copied while the dishonest employee is able to access them.

In the last few years, I have seen  two cases where a sales manager left a company to join a competitor, bringing with him a list of the juiciest, most valuable customer contracts from his former employer. Of course, in both instances, they ended up in court. I don't know if these sales managers made money from the stolen customer lists, but their lawyers certainly did get richer.

Information security has gotten so awful that it makes grownups cry and get stomach ulcers. But since being an adult is overrated, we prefer to laugh about it.